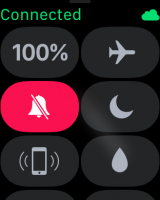 I tried leaving my phone at home for a week, and just using the Apple Watch for communication. Apple Watch is beyond just an accessory for your phone. It can directly connect to WiFi! It can do messages, voice calls, and even do basic tasks like summoning a Lyft ride.

With these capabilities, plus all the other large screens around many of us (laptop, car infotainment, etc.), do we still need to carry our phones too?

After a week I concluded that without its Bluetooth supporting voice-calls on headsets, it’s not practical for daily use yet. When/if headset support is added, I would use it for weekdays. During weekends I’d still carry my phone.

My phone was left turned on the whole time at home and connected to the internet, but for some activities it did not even have to be on (marked with 📵 below). I did have an extra Freedompop hotspot in my car, as a back-up for cases explained below. The need for this back-up plan could be eliminated if rumors are true and next Apple Watch has an LTE modem.

Below is a list of items that positively or negatively surprised me.

iMessages work natively on WiFi even when phone was off. I could even get Farsi (Persian) texts, but could only send English. There is an option to choose language, but it’s just English for now.

The number of messages shown for each conversation is limited. I think it is close to 30 messages per each thread, but it might change based on length of messages.

For texts to work, your phone should be online somewhere so it can relay text messages via the internet to your watch. Pretty cool! And it was handy, as I had 2-step verifications in some websites and the authenticator app was on my phone. Fortunately, all supported 2-step via text message.

I have to mention some arguments exist against text message 2-step authentication. But for the purpose of this experiment, it was working. 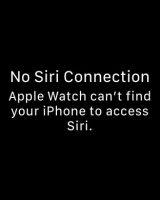 Better than expected. But not as great as let’s say Alexa or Google. But you rely on this a lot if you just have your watch. It felt very weird yelling at my watch though.

Update: if the Siri on watch makes one initial contact with the phone, it can work independently afterwards with a WiFi connection. Weird requirement, but OK.

Normal voice calls work … even without the phone! 📵

This was what got me motivated to do the whole experiment. You can take or make phone calls if your carrier supports WiFi Calling and you have enabled it on all your devices. Obviously you have to be connected to a WiFi network for it to work. The tiny speakers are not that capable, so no long conversations.

Interestingly, the voicemail content can be heard on the A2DP enabled headsets. This is unlike voice calls which cannot use headsets on the watch. You will need WiFi to download the voicemails, and it may depend on the phone carrier. I am on AT&T and it worked nicely. Your phone doesn’t have to be online. 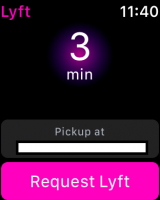 I love the Lyft folks! They saw an opportunity and used it. The app can work without the phone being online, and you can summon a car with their minimalist interface when on WiFi. Respectable!

It simply worked. You can navigate to Home or Work, if you have saved the address. You can also search for a new address or search based on business types. Obviously you need WiFi but your phone can be completely off.

There are many other apps that provide standalone WiFi based service. Most, though, are limited to basic functionality. NY Times has summary of their top stories. Nest allows you to change your status from Home to Away. Lifx shows your favorite groups/devices and allows you to control them.

This was a nice surprise. Most of the days I went home with 80% of battery left. For example one day that I had multiple text/iMessage threads going on and a couple of voice calls, I went home with 44% left. This is pretty good, given the diverse use cases.

You cannot add new WiFi on the Apple Watch

You can pair with a new Bluetooth device, but you cannot add a new WiFi network just using the watch. This is annoying and extremely limiting. Almost everywhere I went, from bars to someone’s house I had not visited before, they had WiFi. But I could not use that and had to carry my hotspot just for those places.

How stupid does Apple think their customers are if they cannot be trusted with adding a network on the watch? Disappointing.

No headset support for voice calls

Supporting voice calls is a very exciting feature, with a lot of prospects. However, the lack of Bluetooth Hands Free Profile makes it unusable beyond a gimmick. It does not work even on Airpods! For example, my friends were not responding to iMessage so I had to call them at a concert. It was impossible to communicate on the watch’s tiny speakers, got me really frustrated over and over.

I cannot comprehend why they went 25 miles of the marathon but skipped the last mile. Supporting HFP is not comparable with supporting WiFi calling.

The watch is meant to be a companion for you during your activities. Part of it is when you are biking or running outdoors, which requires A2DP and some gigabytes of storage to sync songs. Both are there and work nicely. 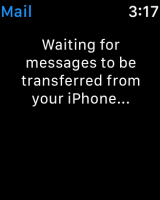 It was able to show emails from when it had synced with the phone. At some point it even claimed it is trying to sync with my phone, which was online but not nearby.

There were many disappointments there too that did nothing without the phone: Yelp, Twitter, Facebook Messenger, Telegram, Geico …

I wish more app developers would consider joining in the support. I personally appreciated not being interrupted by Messenger and Telegram. But in the long run, that can be different for people who rely on these more than I do.

These are not really “ugly” but I had to keep the theme. The list below is the things I missed while just using the Apple Watch.

The wireless chip in the watch, which I assume is a combo BT-WLAN one, only supports 802.11 b/g/n 2.4GHz networks. Slightly inconvenient at times, but not a deal breaker.

It’s weird to verbally ask Siri things, even on your phone. And when I do, its answers are not that interesting or usable. I missed Google’s results. 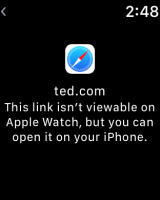 More than once I got a link in text, and could not open it because my phone was not there. It’s an understandable choice though, given lack of a large screen.

One again, I agree with their choice that a camera is a waste of weight to carry and landscape on the device. But, a couple of times I really wished I had a camera handy.