San Francisco is going through a face change, where people are being evicted to make room for the new workers. There is demand for finding residence in SF, while many many regulations restrict construction of new residences. Since tech giants (Google, Apple, Facebook) started to offer shuttle services to their employees for a better commute between San Francisco and South Bay, it has gained more visibility that “techies” are the root of the evil. I wanted to take a not-so-scientific look at these assumptions. 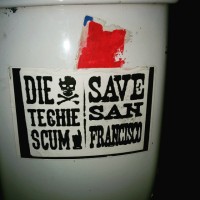 The assumption is that all the evictions are because the techies are flocking to the city. And since we are easily identifiable -due to our attitude, lack of social skills, and sometimes foreign origin- the locals find it easy to justify channeling their (valid) anger only towards this group. I have seen “Die Techie Scum” signs here and there, and faced enough resentment to understand the issue is real. Sometimes, the person making the negative comment has never lived in SF. But the thought that a techie like me could live there seems unjustified to them.

Personally I deeply sympathize with the non-techies who are getting crushed. If I can’t handle the prices in SF, I can’t even imagine how lower income people get by. It also reminds me the gentrification that happened in my hometown, Tehran, while I was growing up.

So to see how real is the impact that just tech workers have had, I did some digging. Census Bureau has detailed tables of their “Estimates” of occupations (table S2401) that you can easily explore. In no way this is an elaborate scientific research. And since I am no “data scientist” there is no p-value reported and neither is any use of R 🙂 The table below has some of the interesting data items.

Are techies the largest group in SF?

First, I took a look at the general employment fields of 16+ employed civilians in San Francisco.

So let’s focus on the bigger groups from now on. I found that in 2014:

The other point is the management and financial people outnumber pure “techies” by far. Unfortunately, Census Bureau does not indicate if these are finance in the tech sector, or “old school” finance. To get an idea, in 2005 when the tech giants were not as big, there were 77 thousand people in the same management and finance field.

Answer: no, they are not even close to being the largest group.

Are techies the best paid group in San Francisco?

This really got me. Median earning changes are very disturbing! Table below shows the median earnings in 2014 adjusted dollars. Based on this table, the issue that stands out is how service sector has a lower income compared with 2005. Correct earnings for legal occupations was not reported in 2005, so accurate change cannot be calculated.

So while the average worker in the city had an almost the same buying power as in 2005, the rent has increased significantly. And more than that, service industry workers grew in number while their buying power declined! If you are aware of the prices in San Francisco, you can see that the service industry workers are really under pressure. Understandably the pressure of rising rents will crush these 88 thousand people the most.

Answer: yes, and their pay has also increased significantly.

Have techies grown the most across different sectors?

Now let’s get to comparing the growth of job headcounts in different factors. I have selected the larger groups (with more than 2,000 headcount changes between the years) in the following chart.

Answer: No: while computer professionals grew their share in the city, so did many other groups.

Now I wonder how these compare to other cities, such as Dallas. I guess I have to visit that later!